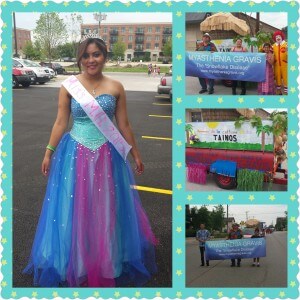 Ben Maravilla is a one-man dynamo for raising MG awareness in Aurora, Illinois. For the third year running, he entered a “Myasthenia Gravis” float in Aurora’s July Puerto Rican Heritage Parade. His daughters and grandchildren got in on the fun. They walked with the “Myasthenia Gravis – Snowflake Disease” banner, handed out candy, and even elected a very lovely “Miss M.G.”!

Under Ben’s direction, the float was decorated to educate 2,000+ parade attendees about myasthenia gravis – and share a crowd-pleasing nod to Puerto Rican history, too!

Ben commented, “At one parade I found another woman who has MG. It’s a great way to help others learn about this disease. I even had a chance to tell Aurora Mayor Tom Weisner about MG.”

Ben’s putting his team together now to construct an entry for the upcoming cardboard boat race to be held Saturday, August 15, at Mastadon Park in Aurora. His past boats have displayed MG logos, and given his team an opportunity to share myasthenia gravis information with the community. In fact, in two of the last three years his paddlers took first place in the nonprofit division. Great way to let others know about this little known autoimmune illness.

You can stop by to see Ben, his team, and their boat: