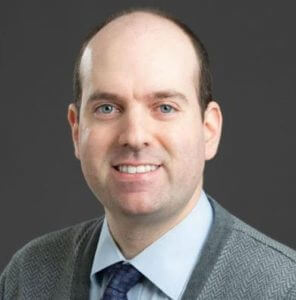 Conquer MG gratefully acknowledges the support of our sponsor!

With myasthenia gravis, your body produces antibodies that interfere with the communication between nerves and muscles. When the communication is interrupted, muscle weakness occurs because the affected muscles can’t contract as well as usual.

There are a number of ways to treat MG, depending on the severity of the symptoms, and how aggressive the doctor and patient want to be. As the chart shows, the first medication often used is pyridostigmine (Mestinon®). It addresses the symptoms of MG, not the underlying problem.

If a person’s symptoms are more severe, it might be necessary to suppress the immune system with prednisone. Prednisone has many side effects, so steroid-sparing agents – azathioprine, mycophenolate, etc., may be added to the mix.

More aggressive – and different – treatment might be needed if the individual experiences:

What follows is a discussion of IVIg and plasma exchange, which can be used as rescue therapy (with the goal to improve crisis symptoms quickly) or maintenance therapy (to ease ongoing severe symptoms).   Two new emerging treatments, rituximab and eculizumab, also will be addressed. 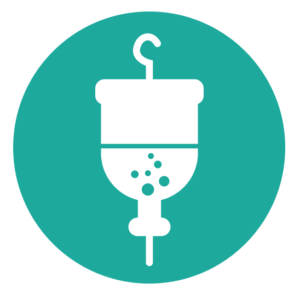 IVIg is a blood product. It doesn’t look like a bag of blood. Each batch contains antibodies obtained from thousands of blood donors. The antibodies bind to white blood cells – the main cells in our immune system – and prevent them from participating in unwanted immune responses. It’s as if we are distracting the immune system, so antibodies aren’t free to do the damage they were doing.

IVIg can be used as a rescue therapy or as a maintenance treatment. The first time you get an IVIG treatment, you receive a loading dose based on your weight. That dose can be divided over 1 to 5 days, depending on your health and situation. When administered over more days, fewer side effects are likely. When IVIg is used as a maintenance treatment, a smaller booster dose can be administered every 2 to 8 weeks.

There are many different brands of IVIg, and they are generally considered safe for most patients. Recently, Gammagard, a commonly used product, has been on shortage and so other products have been used.

IVIg is infused into a patient’s vein, and the infusion takes several hours. A technician or nurse frequently tracks vital signs and watches for allergic reaction. With maintenance treatments, the technician will start speeding up subsequent infusions to see how the individual fares.

It may take several (2 to 5) days to see the “boost” from an infusion. Patients tend to feel fatigued the day of and the day after an infusion, due to the treatment and to benedryl that is given to prevent allergic reaction. Many patients notice a “wearing off” before the next dose is due.

People can get hives or rash with the treatment, or a fever. Sometimes it happens with every dose, sometimes just with one product.

The potentially worrisome complication is blood clotting. IVIg is very protein-rich so it will make the blood a little thicker. If someone is prone to blood clotting or has narrow blood vessels (for instance, due to heart disease), IVIg could contribute to a heart attack or stroke. It’s important for a physician to consider a person’s overall medical history when deciding on IVIg. For this same reason it’s important to check if a person is sensitive to swelling or has mild heart failure because IVIg puts a lot of fluid through the veins and could worsen these conditions.

Subcutaneous Ig. Subcutaneous Ig is a newer form of treatment that involves putting antibodies not in the vein, but under the skin. In this case a person does not need to go to an infusion center or have a nurse come to their home to start an IV and monitor treatment. Because the immune globulin is absorbed very slowly into the body, there’s less chance of headache and less chance of severe side effects like kidney injury. 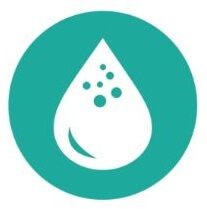 Although there are some differences, the term “plasma exchange” also goes by these terms: plasmapheresis, PLEX, and apheresis. Plasma exchange is a dialysis-like procedure that is performed on a patient’s vein. An individual is hooked up to a machine that nearly simultaneously removes the blood and puts it back in. The machine “skims” the blood of harmful antibodies. Removing the antibodies prevents them from causing muscle weakness.

Plasma exchange is often used as a rescue therapy for individuals who are in state of crisis or severe exacerbation. In this situation people tend to get several sessions over one to two weeks, often with the person admitted to the hospital for 10-14 days. Sometimes occasional outpatient sessions are helpful for people with worsening symptoms. And sometimes plasma exchange is used as a long term maintenance treatment similar to IVIg.

To perform plasma exchange, good access to an individual’s veins are needed. Most commonly, a large temporary IV in the neck or chest area – called a “central line” is placed by a placed by a radiologist in a hospital setting. In rare cases, an MG patient might have a fistula placed; this is an artificial connection between a vein and artery. Newer types of ports that look like buttons can be placed under the skin. A specialized port might be needed if the individual needs frequent plasma exchanges, tests, or IVs for various conditions, or has weak veins.

Generally, plasma exchange is very safe and well-tolerated, even with an individual who has a complicated medical situation. Your medical team will be watching for infection associated with the port, as well as infection and reduced blood clotting due to the reduced level of antibodies.

Is there medical evidence to support using either IVIg or plasma exchange? There’s not as much evidence as the medical community would like.

At this point in time there is limited evidence for maintenance use of these therapies. However, from a clinical perspective the medical community sees these therapies work.

Here is a quick recap of the advantages and disadvantages of IVIg and plasma exchange.

Next let’s turn to treatments that have been added to the MG tool box more recently: rituximab and eculizumab. 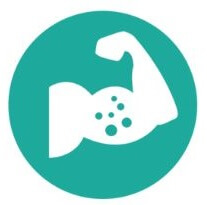 Rituximab is an antibody that a pharmaceutical company created to bind to a certain marker on white blood cells called CD20. CD20 is located on the surface of B-cells and is important in the activation of immune system. Rituximab has been employed in patients with AChR- and MuSK-antibody myasthenia for years, although high quality evidence has not existed to support its use. Results are mixed: some people get dramatically better, for others it’s like a placebo.

An article in Muscle Nerve 56: 185-196, 2017, titled “Rituximab treatment of myasthenia gravis: a systematic review” reported on a study of all previously published articles that address rituximab and MG.  This study found patients were more likely to respond to rituximab if they were MuSK positive, younger, and had milder symptoms to begin with. Antibody titers dropped in 26% of AChR antibody patients, and in 82% of MuSK antibody patients.

Rituximab is given through an IV, in an infusion center or hospital. There are several different dosing schedules – one requires a single dose, then a second dose two weeks later. A booster dose is possible in six months. An alternative is a weekly dose for four weeks. Generally rituximab is considered safe and and well tolerated.

Eculizumab (brand name Soliris®) was FDA-approved for treatment of myasthenia in 2017. It works by interfering with the complement system, the series of proteins the body uses to label cells for inflammation.  In MG, the set of proteins is activated by the person’s autoimmune response. Eculizumab is a human monoclonal antibody directed against complement protein C5. This interference decreases the activity of the MG. Clinical trials for this drug involved 76 hospitals in multiple countries. The trials confirmed eculizumab can have a meaningful impact on the severity of MG symptoms, and significantly reduce hospitalizations.

With eculizumab, an individual receives four weekly infusions, and then a maintenance dose every other week. Because the treatment could leave one vulnerable to meningitis, patients are required to get meningitis vaccines before starting treatment.

Here’s a brief comparison of these two treatments: